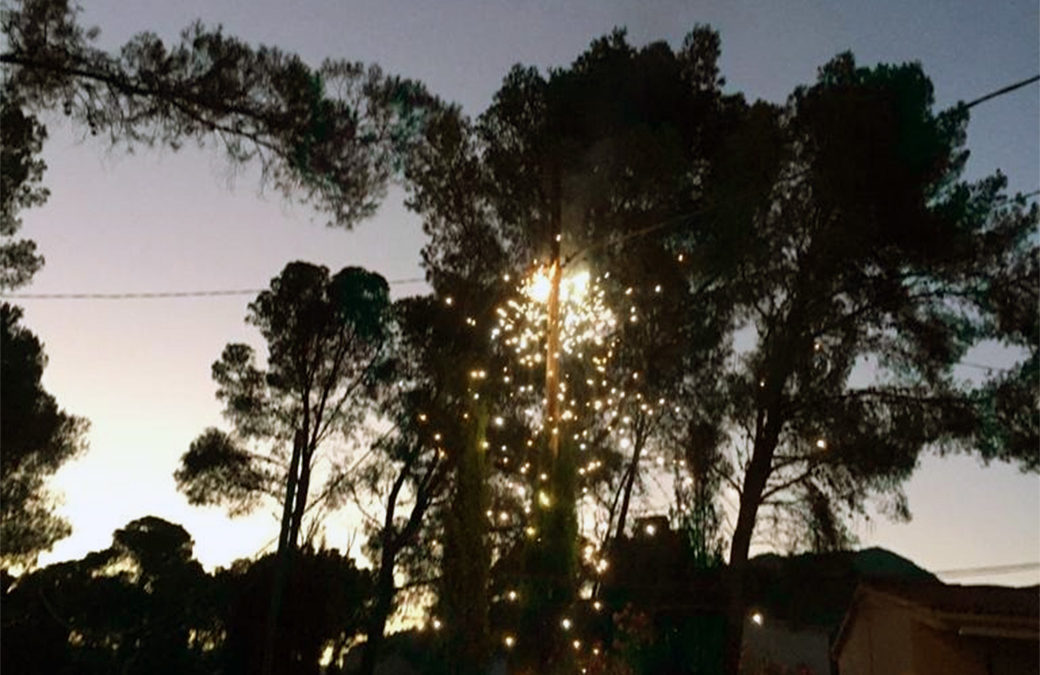 To honourable MAYOR PRATDIP and the Municipal Council

GLORIA MORENO CASTILLON, con DNI 37287967E, y JOSE PESCADOR JIMENEZ con DNI. 30429538D councillors of Pratdip, for the group Avanza Pratdip, and with address, for the purposes of notification, at calle Gladiolo, núm. 6, of Las Planas del Rey, appear before this council and inform it that, on 16 July 2021, a new incident occurred in relation to the poor state of the electrical network of the housing estate Les Planes del Rei, which is very dangerous both for the safety of the inhabitants of Les Planes del Rei, as well as for the elevated risk of fire which has been created.

On 16 July, at nightfall, there was a fire in Narciso Street, nº13, caused by the dilapidated electrical cables, which short-circuited, causing electrical sparks and burning part of a pine tree. Here is a video of the terrifying images. Neighbours alerted the fire brigade, who came immediately and put out the fire. The services of Endesa were also called in. This time we were very lucky, and the fire did not spread to the neighbouring houses, because the neighbours noticed it and acted quickly. But if it happened at night, or at any other time when there was no one around, or if there was a gust of wind, which is so frequent in Planes del Rei, it could have caused a fire, with the danger of incalculable physical and material damage.

On the other hand, the fact that there is no lighting in the streets of Les Planes del Rey and the poor state of the streets, is another constant risk of falling or having an accident, now that there are so many people on holiday in the urbanisation, and people are travelling at night. The deplorable state of the cables, which hang everywhere, touch the ground, get tangled up with each other, get caught between the trees, etc., is really very frightening.

We believe that there is sufficient legal cover to provide this minimum and necessary service for a population centre. In this sense, article 21.1.m) of Law 7/1985 of 2 April, on the basis of the local regime, states that it is the mayor’s responsibility to adopt the necessary and appropriate measures against all risks. The mayor may assume, reporting to the plenary, exceptionally and subsidiarily, the management of the public lighting service, as was done in its time with the drinking water service, and as long as the particular and difficult urban situation created with the reparcelaltion and future reception of urbanization, which, as we all know, even if it may take a few years to be resolved, is not resolved.

However, Article 26 of the same law is also applicable, which states that in all cases the municipality must provide the services of public lighting, cemetery, waste collection, street cleaning, domestic drinking water supply, sanitation, access to population centres and paving of public roads. Also Article 67 of Legislative Decree 2/2003, of 28 April, which establishes the minimum services to be provided by the municipality, including public lighting.

For all these reasons, WE REQUEST THE MAYOR OF PRATDIP to take the necessary and urgent measures to re-establish, as a matter of urgency, the public lighting service and the repair and rehabilitation of the entire electrical network in order to avoid the fires, falls and other disasters that could occur if the network remains in its current state

– Read also: We demand public lighting in our urbanization

We demand public lighting in our urbanization