The conflict between Planes del Rey and Pratdip is bogged down 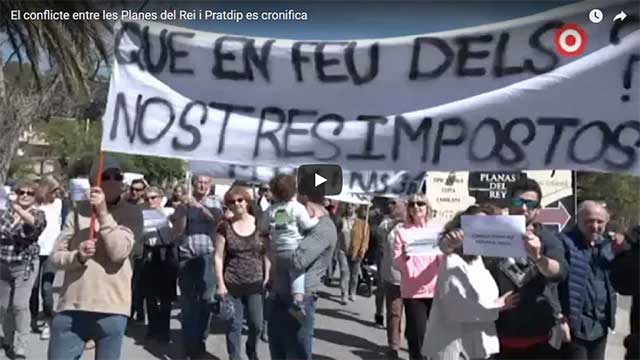 About a hundred people from Les Planes del Rei demand that the city council of Pratdip guarantee them the minimum services. They consider that the town hall has abandoned them and they wanted to give visibility to the conflict by protesting.

They say they are abandoned by the city council. Their complaints focus on problems of water supply, dirt, bad electrical installations or poorly maintained streets. They denounce that the town hall has no respect towards them and does not guarantee the basic services or their maintenance. For this reason, Oscar Serrano, councilor at the Pratdip Municipal Council for the Electoral Group “Uni by Planes del Rey”, demands more political will and the involvement of the municipal council.

They claim to feel lonely, defenseless. And for that, to give more visibility to the conflict, the inhabitants of Les Planes del Rei decided to demonstrate on the main street of the urbanization.

His arguments, however, are different from those of the mayor of Pratdip, who claims that the water network or electrical installation belong to the inhabitants of the urbanization, that this urbanization is private. Current urban regulations can not be ignored and, therefore, until all pre-receipt phases are met, they can not support the minimum services.

An agreement on water in the air

With regard to the water network, a collaboration agreement between the Baix Camp Region Council and Pratdip City Council is currently under consideration. According to the town hall, it could allow to carry out basic services in the zone, without changing the price of water at least this year. The document indicates that during the year 2018, the rates will coincide with the prices approved by the city council for the Planes, which, in turn, will have to coincide with the cost study prepared by the operating entity. For the following yearsif the agreement were extended, the amount of the fee could vary, taking into account the economic study conducted in this area. In this proposal, it is clear that in the first quarter of management, the water marketing company would be in charge of drafting a service master plan (Pla Director del Servei), where the amount of necessary investments will be collected to perform the improvements, replacements and repairs required to provide quality service. At present, no political consensus has been found to sign it. A situation that worries the municipality of Pratdip.

Beyond this agreement with the development company of the water, Planes del Rei also waits for the approval of the final phase of a project which continues for since many years. It is the center of tourist and cultural promotion, thrown(planned) in 2016 but that began the works last year. The initiative, with a budget of more than 190.000€, holds of the red wire due to the approval of the municipal budgets in 2018. According to the mayor of Pratdip, this is a decision that depends on the city council but that could not go forward if the municipal accounts were carried forward.

At the same time, he emphasizes that the project of this center is to become a cultural place for the people of Planas, with a showroom, but which at the same time serves as a tourist point for visitors. In case this project develops, a person would be assigned to work there. Part of the funding for this project comes from the grant from the Vandellos nuclear power plant. It is expected that the work will be completed by July. If the municipal accounts are accepted … Otherwise, it could be delayed.

According to the city council, in 2017, with a municipal budget of over 1.300.000€, last year, they invested more than 230.000€ in the urbanization of Les Planes. These are calculations that take into account the maintenance of a swimming pool (about 19.000€), the setting up of a bus line (about 22.000€), as well as other occasional repairs that have been made in case emergency.

On the other hand, the process of receiving urbanization continues, especially since the reparcellation of the land has been completed only for a few weeks. Currently, this procedure is subject to public information and is registered in the Official Bulletin of the Province of Tarragona. Thus, interested parties still have less than two months to file an administrative litigation document. (Recourse template here. Print it and modify it as you see fit.)

At this point, the steps to follow are to register the villas in the civil registry of Falset and later to make the necessary improvements to the basic services of the zone. However, Oscar Serrano argues that this reparcellation and subsequent registration must be done on the basis of the prices of 10 years ago and claim that they do not match the actual valuation of the dwellings.

During the previous legislature, a study was conducted to record the costs of this work. At the time, it was estimated that they could exceed 6 million euros. Now it is necessary to revise this document and divide it into phases.

At the same time, the relationship between Planes del Rei and Pratdip has been influenced several times by judicial processes. One of the last decisions handed down by the TSJC (Superior Court of Justice of Catalonia) decided the dissolution of the Urban Planning Collective for Conservation (EUCC), which is currently being liquidated. Because of this fact, the entity currently ensures that it does not have a budget to make urban improvements. Given this problem, the current mayor of the municipality suggests creating a neighborhood association that can support the collection of charges for each neighborhood owner.

The conflict comes from far away. Urbanization has more than sixty years of history, and its reception by the city council has already gone a long way.