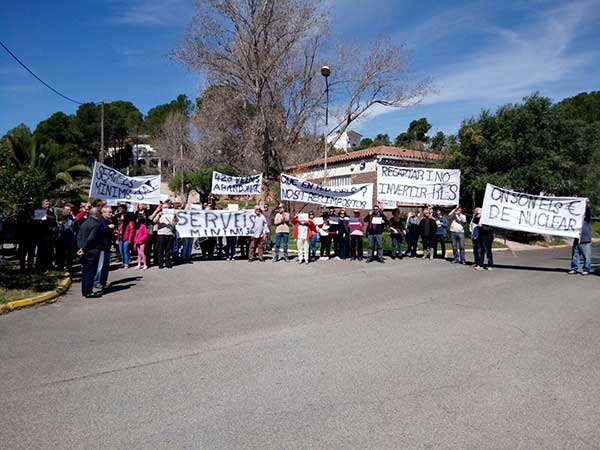 Once again this Sunday, the inhabitants of Las Planas del Rey went to the streets to demand, once again, that the Pratdip Municipal Council “invest more resources to guarantee the minimum services”. A hundred inhabitants have publicly denounced “the state of abandonment of the zone”. “Once again, we ask the city council to guarantee the minimum services for urbanization, such as water supply and the cleaning of streets and green spaces. The Pratdip City Council relieves itself of its obligations by saying that urbanization is private. But we do not consider it that way, “explains José, a resident of Planas del Rey.

During the protest, residents displayed signs and posters that read messages such as “428 neighbors abandoned by their city council”, “our taxes” and “increase and invest nothing” for the city council. The villagers also feel “discriminated against and abandoned”. According to José “For three cubic meters of water I paid € 47, when at Pratdip they pay much less. This difference leads to the existence of first and second zone inhabitants in the same municipality “. In this situation, according to the inhabitants of Las Planas we must also add problems such as “lack of lighting, landscaping, maintenance of trees and other anomalies that exist”. For his part, Oscar Serrano, an owner in Planas del Rey and advisor to the Pratdip Municipal Council for the Electoral Group “Uni by Planes del Rey”, also assured that “We are tired because we have been asking the council for many years Municipal that it invest the money of our taxes in urbanization. “” The 428 parcels of the residential area are abandoned, “he says. The inhabitants recall “That there is a decision of the TSJC (Superior Court of Justice of Catalonia) which forced the dissolution of the EUCC wich managed the services of the urbanization and that now it should be the City Council that assumes them “.

“We can not break the law”

The newspaper contacted the mayor of Pratdip, Joan Maria Rovira, who recalled that “the city council can only act in case of emergency, since the services, such as the internal network of drinking water, do not have still not been received by theCity Hall of Pratdip, and therefore belong to the owners of the urbanization, which is private “. “On the contrary, if Pratdip’s municipal council acted, as urban residents want, we would go beyond the law and divert public funds. We can not do it, “concluded the mayor of Pratdip.