Twelve municipalities in Baix Camp discharge their wastewater into rivers 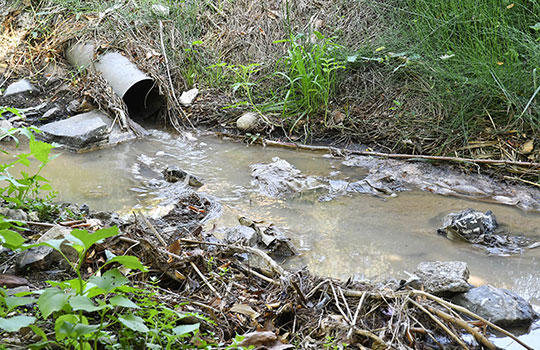 Have you ever wondered what happens to waste water from municipalities without sewage treatment plants?

“Nothing is done. Everything goes straight to the river”, Judit Giró, mayor of Capafonts since last May, is clear and worried. The municipality is located in the Prades Mountains, just at the source of the Brugent River. There are no sewage treatment plants and so far, the city’s wastewater has never been treated. They are thus discharged directly into the river, which continues its route through Farena (municipality also without a sewage treatment plant) until reaching La Riba, where it flows into the Francolí river.

This is just one example of what happens in municipalities that do not have a sewage treatment plant. In the particular case of Baix Camp, there are a total of twelve villages: L’Albiol, Almoster, Arbolí, L’Argentera, Capafonts, Castellvell, Colldejou, Duesaigües, La Febró, Maspujols, Pratdip y Vilanova d’Escornalbou. Some, like Almoster, use the Reus sewage treatment plant, according to its mayor, Angel Xifré. This is also the case for Castellvell del Camp. “In Pratdip, we do a small treatment as we can on a raft before pouring water into the barranco (ravine),” said Mayor Joan M. Rovira.

However, the case of most municipalities lacking the necessary infrastructure is similar to Capafont, and she’s worried. The acquisition of a wastewater treatment plant is not the responsibility of the municipality, but is the responsibility of the Catalan Water Agency (ACA), an agency with which the Diari of Tarragona tried to make contact to ask this question, but without getting an answer.

The Baix Camp Regional Council is aware of what is happening and the environmental problems it can cause. Regional Entity President, Joaquim Calatayud, also expressed his concerns and recalled the economic difficulties that ACA has experienced in recent years. “For economic reasons, practically none of the planned actions has been carried out,” explains Calatayud, who recalls in particular the case of the Borges del Camp (of which he is mayor) which, despite the fact that the water treatment plant it’s almost finished for since 10 years, she could not be commissioned until 2019. At the same time, the municipality also discharged sewage into the Alforja river, for which Calatayud was accused of environmental crime by the El Freixe platform. Finally, he was acquitted. The judgment proved the existence of spills, but also the ACA authorization to do so during the construction of the treatment plant. And if the body competent for building the sewage treatment plant does not make the investment, what can the municipalities do? “We are waiting to meet the Catalan Water Agency. There seems to be a will, but we are waiting”, says the mayor of Capafonts, Judit Giró, and adds: “If the forecast it’s 10 years old, we will work alone and consider creating an ecological plant”. In addition, it wants to raise awareness among inhabitants, betting on ecological products and detergents.

“It seems that the ACA is beginning to get out of the black hole”, added Joaquin Calatayud. It recalls that, for example, work has already been undertaken to expand the treatment plant at Cambrils, that Botarell is in the process of the call for tender. He stil lacking Maspujols and Vinyols. “We hope we start with the small villages,” he says.

The Tarragona Diari has been able to see the discharge of waste water into the region’s rivers. In Duesaigües, for example, parallel to the T-343 road, which connects the Argentera, the watercourse Reial flows into the Riudecanyes Marsh. Going down a slope next to a restaurant, it is easy to descend into the watercourse and, a few meters walk, you meet a pipe from which water never ceases to sink. The smell of detergent is mixed with that of fecal waters, which makes for an unpleasant combination. The image is not better either: brown water, toilet paper stuck everywhere and even a compress. The situation is repeated in Maspujols, where the Diari has also located the point where the waste water is discharged, in this case to the Maspujols river (who passes through Riudoms and throws himself in Cambrils, in Punta de la Riera de Riudoms).

“The effects are worrisome, said the Catalan Ecosystem Study and Protection Group (GEPEC). The environmental association points out that the filtration of wastewater in the subsoil results in “contamination of wells”. “The Baix Camp has water, but since the right measures are not taken, there is pollution and, instead of solving the problem, water is extracted from the Ebro river, ” they say.