Minutes of the meeting of the owners of January 28th, 2018 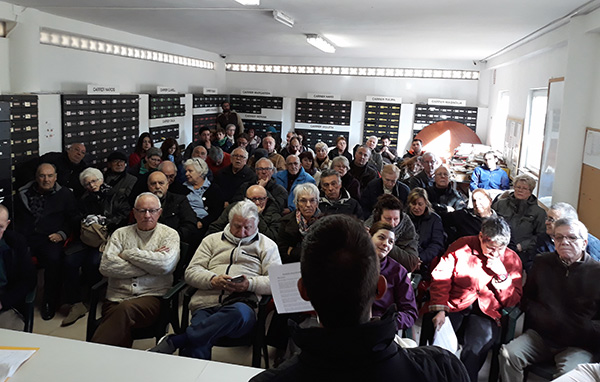 The meeting was held in the room of correos de Planas that we had arranged for this purpose and about 70 people were present.

This meeting was organized by the Grupo Colaboración Planas which is made up of women and men of good will, from different Planas associations, to which some Planas owners have joined to improve the situation of our urbanization.

Mr. Abraham RUIZ gave a lengthy presentation of our new group and explained the reasons for its creation. His presentation took place in Spanish (Castellan) which he then translated himself into perfect English. Mrs PLANET translated into German while Mr LALOYAUX summarized it in French.

Abraham emphasized the future of Planas and his future representation at the Pratdip Communal Council. Indeed the next municipal elections will be held in May 2019 and it is imperative that only one list be presented by Planas and we have a maximum of elected. The ideal would be four elected but to hope to achieve this result all Planas owners must be aware that they have an essential duty to achieve, they have to vote. For this they must be registered at the town hall (empradonarse) and the right to vote (censarse) before 31 October 2018. Those who are already will have to go back through the town hall to be confirmed that they are registered on the list of electors with the right to vote. We have written a procedure for this, attached to this message.

Mr Oscar SERRANO i DAURA, councilor elected of Pratdip explained that his political group left the majority because the current mayor had not respected the agreements signed together in the political convention for Planas del Rey. It also explains that the ordinary “pleno” municipal convened on January 10 last in the presence of 40 to 50 owners of Planas, that the water problem that we have had on the 31 of January was not even on the agenda. It is a shame and also that the people present at the “pleno” had to listen to the lies of the mayor, the contempt he had with his silence and his public statements in some media.

Oscar also explained that he had lodged a complaint twice on January 12 to the Catalan “síndic de greuges” and to “the ACA” against the town hall because of the situation we had for 10 days: lack of water and no willingness to bring water or solve the problem.

30 owners have complained to the mayor and the Mossos d’escuadra (police), against the silence,of the municipality, edifying images of the water installations and a state of insalubrity of the well of Sabate, etc…

He also presented a request of 8 motions on January 18 to the municipal council, so that these can be voted by all the political representatives at the next plenary meeting of the commune and that these motions are included in the Municipal Budget 2018, enclose copies of these proposals.

Oscar also explained that he filed a request on January 2 to the mayor so that he takes charge of the minimum services required to be provide legally to the citizens of Planas.

Mrs BELGEONNE summed it up in French while Mrs PLANET did it in German and Mr RUIZ in English. This meeting ended with the item “various questions”. Several questions were asked and the answers given gave us very interesting debates.

We will not fail to keep you informed of our actions and procedures and to remind you of the importance for Planas that a maximum of owners are impatronarse to have the right to vote in May 2019.

Attached to this message you will also find a photo that shows you the important assistance that came to our information meeting. We warmly thank all those who were present and also all those who support us through their e-mails and phone calls.

– Read also : The various associations of Planas have decided to join forces